Three Polish-connected artists poet Maria Jastrzębska, fine artist Dagmara Rudkin and composer Peter Copley came together to collaborate on a project inspired by The Snow Queen story by Hans Christian Andersen. Following a research and development grant from Arts Council England we worked together to produce a multi-media installation. You can also watch a short film about our journey, click above. We were joined by photographer and video artist Wendy Pye and performance director Mark C Hewitt. We also worked with actor Rita Suszek and musician Ellie Blackshaw and sound engineer Simon Yapp.  Our aim was to re-imagine this richly symbolic story as a vehicle for exploring contemporary issues: loneliness and social isolation, mental health, gender, sexuality, migration and exile. We received further funding from Arts Council England enabling us to create a live literature production incorporating this work.

Why did we chose The Snow Queen? Firstly, it is quintessentially European and both British and Polish audience are familiar with it. This gives us the opportunity to challenge audiences, both older and younger, with our new responses to it. But secondly its themes strike us as both universal and at the same time relevant today: migration, isolation, depression. Gerda the heroine is enriched by travelling through multicultural landscapes, empowered by meeting people of different social status, age and ethnic background. She becomes more equipped to complete her quest but also makes positive changes to those she meets (for instance she encounters a transformed Little Robber Girl on her way home). She walks into the Ice Palace unaided, finding strengths within herself – a lesson of hope to us all. The story also carries environmental concerns. It shows what happens if we give up our connection to nature and our emotional intelligence – this is what happens to Kai as they retreat further and further into a cruel, unfeeling world… 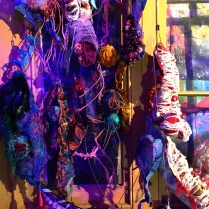 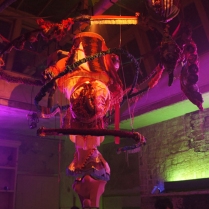 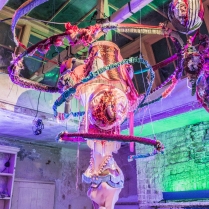 We launched our intial project on the longest day of the year at SUMMER SOLSTICE, in June 2018. As each day became a little shorter we came closer to the end product of our exploration. We produced a pilot installation, revealed to the public on WINTER SOLSTICE 21st December in the Basement of the renowned, historic Regency Town House in Brighton. But of course the installation was only one part of our work. What is also hugely exciting is the collaborative process itself, which included us as artists from different fields meeting, responding to one another and creating something together. We have produced a body of material, many new ideas for cross-genre art which we are now taking forward.

In February 2020 Snow Q the live literature production toured with 5 performances in Portsmouth, Lewes, Birmingham and Lambeth, London. For the live literature iteration of Snow Q we were joined by actor Maria Ziółkowska who played Gerda opposite Rita Suszek who took the roles of Kai and Crow. The performances were directed by Mark C Hewitt and included Peter Copley’s music played by Ellie Blackshaw and some video footage from our original installation by Wendy Pye. At the same time we were thrilled to commission Wendy Pye to create three new filmpoems in response to Maria Jastrzębska’s poetry and Peter Copley’s music. You can watch these now on our filmpoem page.

Take a look at Who We Are to find out more about us. We live in Brighton but would love to hear from you wherever you are.